Prejudice alert. Any place I can wake up to a dog curled up close at hand has an everlasting hold over my heart.  I make no bones about it. Nor am I averse to gushing about it. And should that place be set in one of the prettiest valleys of Himachal Pradesh, well then I’m a complete and unabashed goner.

Since my first visit to Tirthan while still in school, I have revisited more times than I can count to soak up the quietude it continues to offer those seeking it. Over these years I have watched it go from sleepy to stirring to stretching to rubbing its eyes to wide awake. The last as a consequence of the Great Himalayan National Park being declared a UNESCO World Heritage Site in 2014. 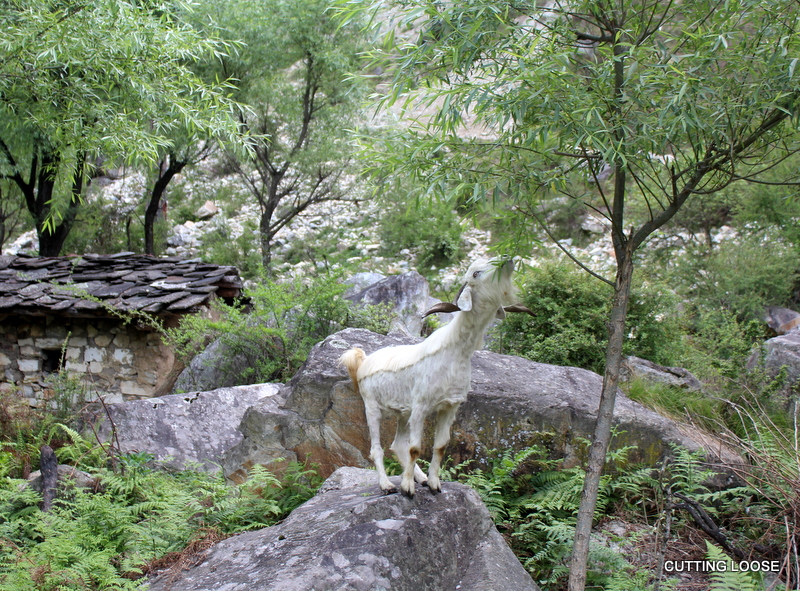 The Tirthan River–springing from a high glacial fount located inside the Park–has remained mercifully unscathed by the polluting ways of hydro-power-generating agencies. Thanks primarily to environment-respecting activism helmed by local residents. Consequently this delightfully remote Himalayan dale has ever only attracted the genuinely devoted to nature and solitude. The number of stay options has increased since but not in the revolting manner witnessed elsewhere in the state. 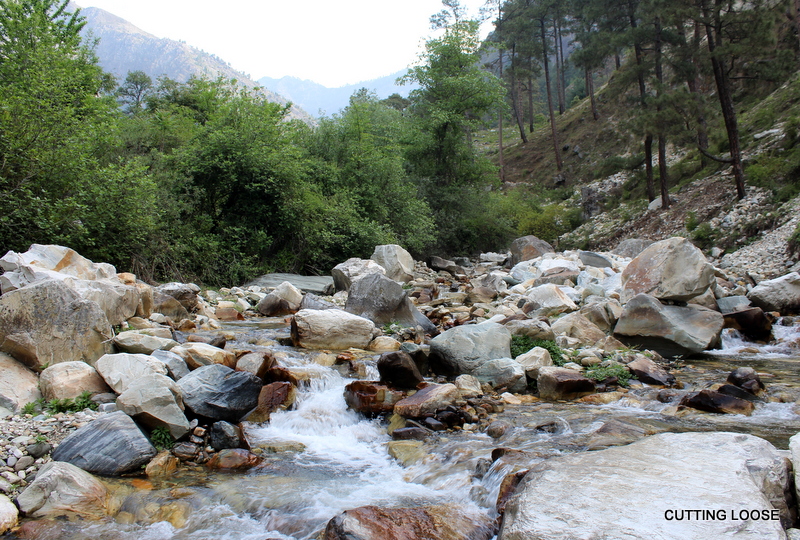 Nothing could have made those frolicking hovers of trout that call its pristine waters home happier; hordes of resultant anglers, neither.  My own claim to camaraderie with aqua-life however is limited to how it’s cooked and presented to me at meal-times. Most wonderfully, I found out at a somewhat off-piste property during my most recent outing only last month.  As was all the other fare, vegetarian and otherwise, that I partook over my 3-day stay. 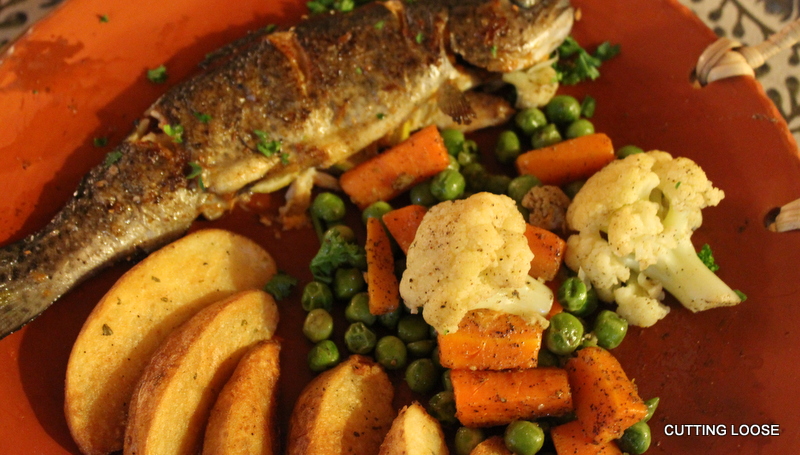 A short drive from the busy (at least by Tirthan’s yardstick) stretch between Sai Ropa and Gushaini, Gone Fishing Cottages is located in Deori village. It’s a happy gurgle away from Kalwari stream, one of the tributaries that splash into the Tirthan River some 500 metres downstream. Accommodation comprises one 3-bedroom cottage and two 2-bedroom ones joined at the hip. I noticed a rather whimsical all-glass one coming up next-door, quizzical onlookers of which included a charm of yellow-billed blue magpies. 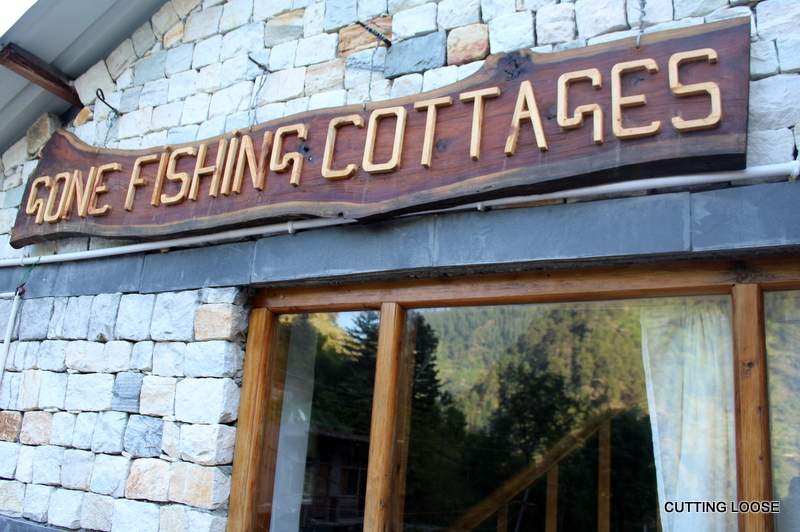 Signs of the owners’ judicious recycling practices thrived wherever I looked. Particularly in the utilisation of empty alcohol bottles as light shades, twine-entwined lamps, curtain walls, even. While the drained end-use complemented to a large extent the stark rough-cut stone and knotted wood look of the cottages, I couldn’t help but think about the current employability of certain livers. Be that as it may, on offer here are all the comforts and amenities one would expect of a well-appointed home away from home.

Only after an overdose of doing absolutely nothing did I step out for a long walk into the nearby woods. The trail winds along, up, and across the sloshing Kalwari for as long as you wish to wander in the company of birdsong and your thoughts. Which I interrupted sporadically to chat with convivial villagers as they went about life as usual–cutting, chopping, fetching, herding, milking, fishing, and that ol’ favourite, gossiping. 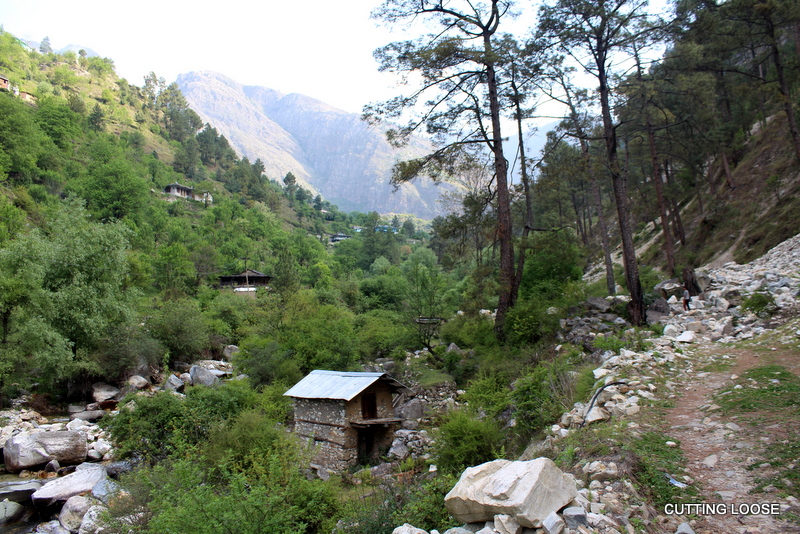 Even though I have long unsubscribed from a frantic pace of life myself, I almost always return burdened with an unshakeable envy for the unhurried ways in these parts. Solace, on this visit, came from the contents of a stuffed-to-its-gills bar in my cottage.  And from the knowledge that Chandigarh is a comfortable eight hours away should I wish to indulge in some highway driving; an adventurous ten hours or so on the scenic route over the Jalori Pass. 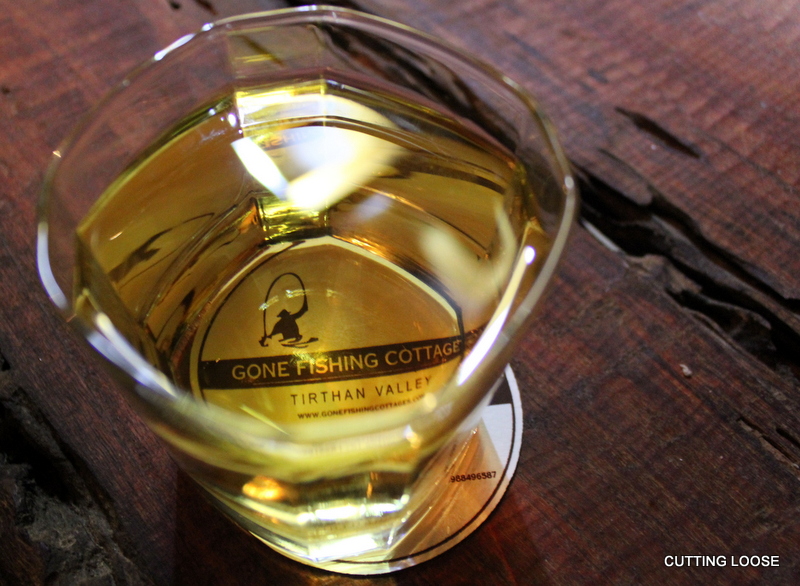 Gone Fishing Cottages are located in Deori some 500 metres upstream from where the Kalwari Nullah merges with the Tirthan River. They are within the eco-zone of the Great Himalayan National Park, an unmatched UNESCO World Heritage Site. Hemmed by orchards and step farming fields on one side, pine and deodar forests on another, their cottages are quite literally cushioned in nature’s lap.

Puneetinder Kaur Sidhu, travel enthusiast and the author of Adrift: A junket junkie in Europe is the youngest of four siblings born into an aristocratic family of Punjab. Dogged in her resistance to conform, and with parental pressure easing sufficiently over the years, she had plenty of freedom of choice. And she chose travel.

She was born in Shimla, and spent her formative years at their home, Windsor Terrace, in Kasumpti while schooling at Convent of Jesus & Mary, Chelsea. The irrepressible wanderlust in her found her changing vocations midstream and she joined Singapore International Airlines to give wing to her passion. She has travelled extensively in Asia, North America, Australia, Europe, South Africa and SE Asia; simultaneously exploring the charms within India.

When she is not travelling, she is writing about it. Over the past decade or so, she has created an impressive writing repertoire for herself: as a columnist with Hindustan Times, as a book reviewer for The Tribune and as a contributor to travel magazines in India and overseas. Her work-in-progress, the documenting of colonial heritage along the Old Hindustan-Tibet Road, is an outcome of her long-standing romance with the Himalayas.

samarkamra
Why Gone Fishing Cottages, Deori needs to be your next holiday destination…